TIFFIN, OHIO – June 30, 2021 – Tiffin-Seneca Economic Partnership is proud to have honored Beth Schweitzer with the President’s Award during the 2021 Annual Meeting June 3, 2021.

“When an elected official or elected leader takes office, you always think about the different disasters you’re going to have to deal with. I don’t think any of us, especially our health commissioner, though that we would deal with a worldwide pandemic,” said Tiffin Mayor Aaron Montz.

“I think the important thing about Beth, is that she was able to walk the line between protecting the public health interest and protecting the economic interests of the businesses so that it would be safe, but also that it would get started and up and running as soon as it was prudent to do so,” said David Zak, President and CEO of Tiffin-Seneca Economic Partnership.

As well as working with elected officials and community leaders, Schweitzer helped to explain the situation in the county during regular updates using social media and by answering phone calls with leaders and small businesses.

“She was the right person at the right time. We were never hesitant to take Beth’s advice,” said Seneca County Board of Commissioners President Mike Kerschner.

Montz said he was especially grateful to Schweitzer for her willingness to work with the State of Ohio to obtain a waiver to allow businesses to stay open by appointment only, which he credited as saving a lot of retailers, especially in Downtown Tiffin.

“Beth was so willing to go above and beyond and figure out a way to make things work in a safe and effective manner,” Montz said.

Schweitzer was replaced by Anne Goon, who served as health commissioner in other locations and has consulted with Ohio State University and with health departments helping them through the accreditation process.

Dan Barbee, President Mercy Health Rural Division Hospitals, including Tiffin, Willard and Defiance, was only able to work with Schweitzer for about a year, but he said he knew they would hit it off, both coming from a nursing background. Barbee said he will miss her in the role locally.

“You were wonderful to work with, with myself and my crew, and we wish you the very best in retirement,” he said.

The statements of congratulations were echoed by other members of the community.

“From the mayor’s office and everyone at City Hall, congratulations on the President’s Award. We are really going to miss your presence at the health department,” Montz said.

To view video of the award winner, click here.

About the Tiffin-Seneca Economic Partnership

Started in 1983 as the Seneca Industrial and Economic Development Corp. (SIEDC), the Tiffin-Seneca Economic Partnership is a private, non-profit corporation dedicated to driving positive economic, downtown, and community development in Tiffin and Seneca County, Ohio, which consistently ranks among the top communities nationally for economic development. Learn more about the great things going on in Tiffin and Seneca County at www.tiffinseneca.org. 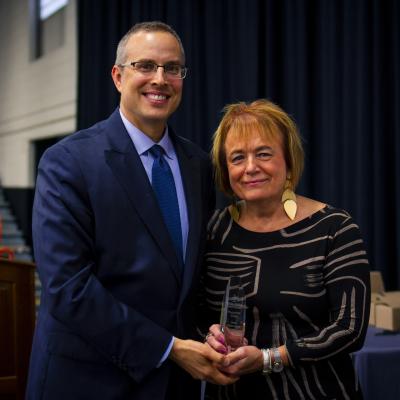