Marcos Herrera (left) signs lease with Tyler Shuff (right)[/caption] TIFFIN, OHIO – November 9, 2015 – A new Paks Karate center has opened in downtown Tiffin, in the Laird Arcade. Instructor Marcos Herrera opened the new space after classes ceased at the Tiffin Community YMCA. “I have been studying for more than 20 years and instructing for one and a half,” Herrera said. “I wanted to be able to continue the classes for the students, and bring new ones in.” Paks Karate teaches Tang Soo Do, a form of Korean martial arts that focuses on responsibility, respect, honesty and caring. The classes will be held in the Laird Arcade, at the corner of Market and South Washington Streets. The class schedule is as follows: Herrera currently has about 20 students, but is looking to expand. He has also brought on another instructor, Casey Dewald. Students wishing to join are invited to come to a class to see what it is all about. “We’re glad to have Marcos here,” said property manager Tyler Shuff. “With the signing of his lease we are only one space away from 100 percent occupancy, probably for the first time in the building’s history.” Tiffin Mayor Aaron Montz said he is also happy to have another activity for kids in downtown Tiffin. “This is a great way for kids to spend their time after school,” he said. About SIEDC Started in 1983, the Seneca Industrial and Economic Development Corp. (SIEDC) is a private, non-profit corporation dedicated to driving positive economic, downtown, and community development in Tiffin and Seneca County, Ohio, which consistently ranks among the top communities nationally for economic development. Learn more about the great things going on at the company’s blog at www.senecasuccess.com. 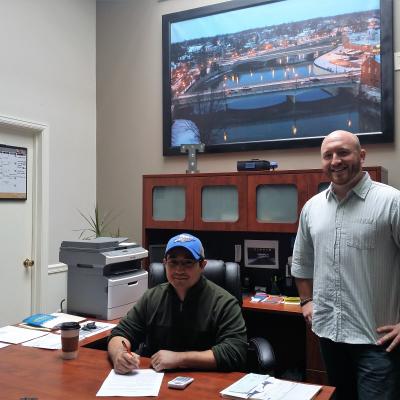