TIFFIN, OHIO – August , 2015 – The 7th Annual Jazzin' Tiffin festival will take place September 10-12, 2015. This annual celebration in Tiffin, Ohio begins at 7 p.m. on Thursday, September 10 with the first ever official Warm-Up Party at the historic Pioneer Mill Restaurant. On Friday, September 11, local university students will get to interact on-on-one with headliner and jazz superstar Chris Standring during the festival’s first “Education Night.” The main event—an all-day jam session with six performers from around the country—takes place on Saturday, September 12 and runs from noon to 10 pm. Jazzin' Tiffin has hosted some of the biggest names in jazz music, such as Eric Marienthal, Rick Braun, Nelson Rangell, Mindi Abair, Chuck Loeb, Warren Hill and Alexander Zonjic. This year's headliner, Chris Standring is among today's hottest jazz stars and he will bring his own special brand of music to the stage on Frost Parkway in Rotary Park on Saturday evening September 12 at 7:30 p.m. Standring has been performing for nearly three decades and has numerous projects in his discography, with his latest release "Don't Talk, Dance" receiving a lot of attention. Add to that the release of his autobiography "Something In the Stars,” a plethora of very creative and entertaining music videos and a new internet TV show and you quickly see that Standring's star is rising once again. "I love doing things that no one else is doing. Especially when people tell me, oh, you shouldn't do that!” Standring said. "I have made a career out of going down the uncharted path. My music has been called funky, sexy, and electric.” he said.

Nelson Rangell will also be making his second visit to Tiffin, this time with not one but two exciting new CD releases featuring chart toping hits. Ann Arbor Michigan's Lady Sunshine & The X Band will perform as will former NFL Star Larry Lee and his band, Back in the Day. Rounding out the lineup will be up and coming Lansing sax man Phil Denny and the Heidelberg University Jazz Ensemble. New this year are the Jazz at the Mill nights, held at the historic Pioneer Mill restaurant on Thursdays at 7 p.m. leading up to the festival. Local acts give residents and visitors a chance to eat great food and listen to live jazz in an upscale, restored building whose foundations date back to 1822. Trio NOT will perform first on August 27, followed by the Pete Ford Jazz Trio on September 3, and the B3 Jazz Trio will finish things off with the Warm-Up Party on September 10.

Tiffin, Ohio has long been known as the Education City, being one of the few small towns in America with two universities—Tiffin and Heidelberg—and in that spirit the first Education Night is taking place on Friday at 4 p.m in the Osceola Theatre in the Gillmor Student Center. The Education Night gives local university students and musicians the chance to learn from a successful contemporary artist in an intimate setting. This year, none other than the headline artist Chris Standring will be featured. About Chris Standring Born and raised in Great Britain, Standring loved the guitar at a very early age. His dream was to come to America and see what all the "fuss" was about. So when he left England for California for a visit that turned into a year living in Los Angeles and ultimately making it his new home, it was that adventurous spirit that has catapulted him to being one of the most sought after guitarists in America. For more information about Chris Standring visit www.ChrisStandring.com or follow him on Facebook. Chris also invites you to view his YouTube videos and his new TV Show "The Inside Track" About SIEDC Started in 1983, the Seneca Industrial and Economic Development Corp. (SIEDC) is a private, non-profit corporation dedicated to driving positive economic, downtown, and community development in Tiffin and Seneca County, Ohio, which consistently ranks among the top communities nationally for economic development. Learn more about the great things going on at the company’s blog at www.senecasuccess.com. 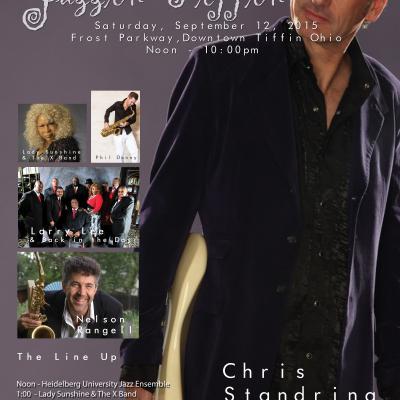 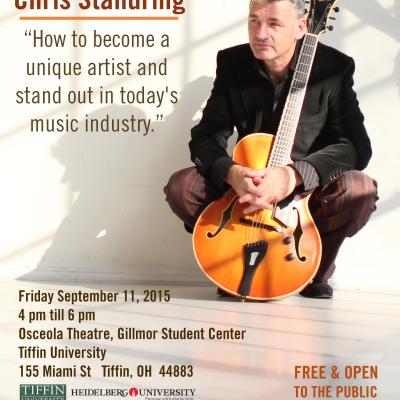