SHARE THIS
More than $275,000 invested in downtown Tiffin through Façade Enhancement program

TIFFIN, OHIO – July 7, 2015 – Today, the Architectural Board of Review approved a Façade Enhancement Grant for the Tiffin Academy of Hair Design at 104 East Market Street. The project is the ninth Façade Enhancement Grant of 2015, bringing the total investment in downtown improvement to more than $275,000. Halfway through the year more than half of the yearly budget for the grant, more than $50,000, has been allocated. The academy will receive $3,750 to aid in their $7,500 project. “We are excited to receive this grant and to give our building a new look. It is great to see the buildings downtown taken care of.” owner Therese Vogel said. Improvements include repairing the existing trim on the front of the building and painting it with a new color scheme in keeping with historic colors. The existing railing on the balcony will be repaired and repainted black. The stucco at the front corner of the building will also be repaired. Mayor Aaron Montz is excited about the impact of the Façade Enhancement Grant on downtown improvements. “The program has been in place for less than a year and it is already making a noticeable difference in the atmosphere downtown. It is amazing to see how many building owners are taking the opportunity to invest in downtown Tiffin.” The building at 104 East Market is known as the "Smith Block" and was constructed in 1895 by local contractor Frank Morcher for the owners William and Laura (Bloom) Smith. There was a twin building next door with exactly the same stone facade but it was torn down to create a parking lot. About SIEDC Started in 1983, the Seneca Industrial and Economic Development Corp. (SIEDC) is a private, non-profit corporation dedicated to driving positive economic, downtown, and community development in Tiffin and Seneca County, Ohio, which consistently ranks among the top communities nationally for economic development. Learn more about the great things going on at the company’s blog at www.senecasuccess.com. Building history courtesy of local historian John Huss. 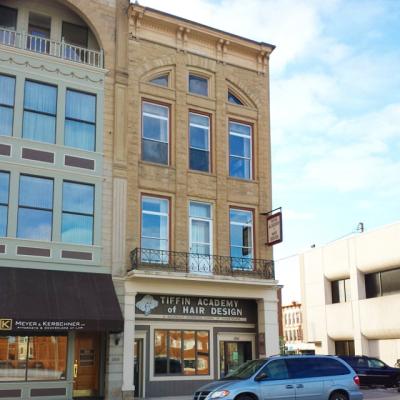