Elks Lodge is the fifth Façade Enhancement project of 2015 TIFFIN, OHIO – April 21, 2015 – During a meeting this afternoon, the Architectural Board of Review approved the Tiffin Elks Lodge #94 at 106 East Perry Street for a Façade Enhancement Grant. This will be the fifth façade enhancement project of 2015. Updates to the building’s exterior will include the installation of windows on the Jefferson Street side of the building, where the original windows have been boarded up, and the painting of the balcony and front façade. The cost of the upgrades is estimated at $6,300, with half of that reimbursed by a Façade Enhancement Grant. Joe Steinmetz, Exalted Ruler of the Tiffin Elks, is excited about the project. “The lodge is important to our organization, and this grant is going to help us restore the structure and keep the building looking great.” Tiffin Mayor Aaron Montz is happy to see another positive change downtown due to the Façade Enhancement Program. “The Elks Lodge is a historic part of Tiffin and I am glad that they are able to use the grant program to revitalize the building’s look.” According to local historian John Huss, the contract for the Elks Lodge construction was given to Emil Converse of Massillon for $30,000 in June 1914. The building was designed by local architect George Netcher, who also designed the Tiffin Knights of Columbus building, and was described by a local newspaper as the “acme of architectural perfection.” Several thousand people toured the facility at an open house held after construction was completed in June 1915.  About SIEDC Started in 1983, the Seneca Industrial and Economic Development Corp. (SIEDC) is a private, non-profit corporation dedicated to driving positive economic, downtown, and community development in Tiffin and Seneca County, Ohio, which consistently ranks among the top communities nationally for economic development. Learn more about the great things going on at the company’s blog at www.senecasuccess.com. 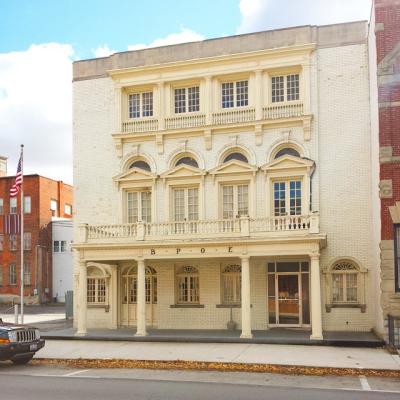